Sorrel and Myriana by Evelyn Sun 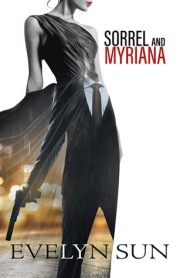 Disclaimer: I received a copy of this book from the author in exchange for an honest review.

It is 1932, and the City of Dalltop is teeming with corruption. In the dead of night, a woman cries for help, but none turn an ear to her pleas. She scuttles through the lost buildings under their leaky roofs for shelter, but they always come. They dress as dark as the night and hide in the shadows. She pierces her feet in mileage and tears her clothes in desperation, but they always find her.

Myriana was a rich young lady with no ambitions, no voice of her own that is until she became the wife of the handsome tycoon, Sorrel Borchardt. She soon learns that nothing is as it superficially appears. The streets that shine during the day actually stand upon the rotten foundations of a mafia organization known as Idon. What hand does Sorrel Borchardt have in Idon? Will Myriana learn to adapt to her new violent lifestyle or will she be consumed by it? Embark on a journey rout in spine-chilling bloodshed as you thread upon the fine line that divides infatuation from insanity.

“I live my life idling about, waiting in fear for what is to come. Death could not come sooner.”

I was contacted by the amazing and super sweet author, Evelyn Sun, to read and review her new book, Sorrel and Myriana. Can we take a moment to just gawk at this cover? Because it is stunning. After reading the synopsis of Sorrel and Myriana I was extremely happy that Ms. Sun contacted me. It seemed fast paced, chilling, thrilling, and intense.

“A poor man may have nothing material, but have all that he requires to sustain emotional happiness. A rich man may have all he can touch, but nothing that he cannot.”

Sorrel Borchardt. The bane of my existence. I can not express how much I hate Sorrel. If I had to kill off a character from any book…it would be him. The way I pictured him was like the teen version of “the most interesting man in the world”. I can see him just sitting in his office going “I don’t always kill but when I do I kill everyone .” The way he treats everyone in his life, especially Myriana, is sickening. Don’t even get me started on the abusive relationship. I know it was in the description, and you should expect it going into this book, but it doesn’t make it any easier to stomach. Some of the things he did to her…I wanted to throw up. He doesn’t care about anyone or anything that’s in his way. And it hurts me to say that I became creepily interested in his character about half way through the first part of this book. I kept telling myself that everything he was doing was an act but I couldn’t help but be fascinated with this multi-faced creature. It’s like he puts on a new suit and becomes a new person. Needless to say by the end of the first part I hated him again. Sorrel Borchardt is a character you will love to hate.

Now that I have vented about Sorrel lets talk about his complete opposite, Myriana. Even though Myriana was written to be that innocent person that was trapped by Sorrel, she has a little edge to her. She doesn’t just sit around and let Sorrel go on his killing sprees. She stands up for what she believes in and tries to run away from Sorrel on multiple occasions not even taking into consideration the consequences. On the other hand, I wanted to shake some sense in Myriana so many times I just got tired of her character. Certain opportunities get placed in front of her, on a gold platter , and what does she do? She shoves it off the table and beats it with a baseball bat. She demolishes it. “It” being her freedom. “It” being my patience.

“This is where he cages me to ensure that his canary never escapes.”

The plot was thrilling and intense. There were always new twists and turns added out of nowhere. There wasn’t just one problem. There were multiple little plot points woven together to form an overall plot arc. The beginning of the book started out very strong, but after a couple chapters a lot of the information was repeated, sometimes more than once or twice. Which, at times, was a little irritating since all you wanted was to move on with the plot and solve the problems. Overall the plot was good, well thought out, but a little slow.

“Between Sorrel’s fingers, I could not breathe, but they were warm.”

If I had to pick my favorite part about Sorrel and Myriana it would be the secondary characters. The secondary characters made this book shine. They made the story move along, gave you a character with a personality wasn’t extreme, and at times gave you a couple laughs. This book is practically dripping blood from all of the characters Evelyn Sun killed off so the only advice I have for you is: don’t. get. attached. to. anyone.

I have to say the writing style wasn’t my favorite thing about the book. I usually aim for the books that have a 1:1 ratio of dialogue to description…sometimes I even enjoy a 1:2 ratio. But this book was borderline 1:10. The descriptions were very dense, I could literally picture everything in the scene from the color of the sky down to the rocks. Every once in a while it was nice but after a while my mind was so cluttered with unimportant details that I couldn’t focus on the plot. The dialogue on the other hand was really good. It fit the time period of the 1930s. Their conversations were very formal and I think Evelyn Sun hit the shifts and details of the language perfectly.

“My vision is blurred as tears swell up. I want to go home.”

All in all Sorrel and Myriana was a extremely detailed book that will keep you on your toes. You wont see half the things coming and the other half you pray your wrong. Sorrel is the person that you hope you never have to meet in your lifetime and Myriana is the person, with some adjustments, you strive to become. All in all I enjoyed reading this book and I can’t wait to see how Evelyn Sun grows as an author in the coming years.